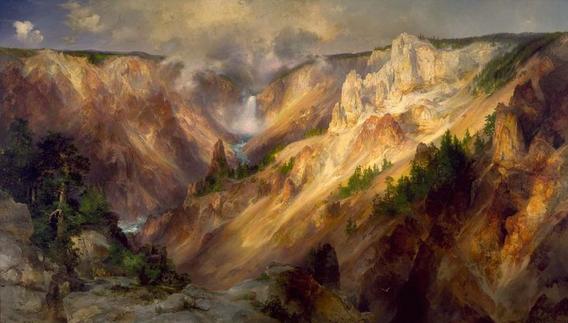 Just some of the many benefits of forests are maintaining air quality and protecting homes and crops from intense sunlight and high winds. Even indoor plants can improve air quality. Forests also provide one natural place to get away from the stresses of urban life. As long ago as Hippocrates, who believed returning to a more natural environment was the cure for city diseases, people have known that life totally away from nature is not desirable. During the Enlightenment Period understanding nature and natural phenomenon was the way to understand God.  This follows the rationale that an appreciation of the work helps one to understand the maker of the work. They also believed that time spent in nature facilitated a therapeutic process and so spas were created to this end. The Romantic Period held nature in high regard and saw city life as causing mental, social, and moral harm. This is reflected in many paintings of this period where natural scenes are depicted showing how nature is magnificent and man is nearly insignificant. In 1865 Olmsted supported the idea that nature promoted good health which became the philosophic basis for the later creation of the national parks. The naturalist John Muir wrote in 1901,

“The tendency nowadays to wander in wildernesses is delightful to see. Thousands of tired, nerve-shaken, over-civilized people are beginning to find out that going to the mountains is going home; that wildness is a necessity, and that mountain parks and reservations are useful not only as fountains of timber and irrigating rivers but as fountains of life. Awakening from the stupefying effects of the vice of over-industry and the deadly apathy of luxury, they are trying as best they can to mix and enrich their own little ongoings with those of nature, and to get rid of rust and disease.”

It has long been assumed that time in nature leads to health benefits with a recent testament to this being the T.B. sanatoriums of the late 19th and early 20th centuries. Biophilia is a hypothesis that we have an innate yearning for the planet’s living systems and therefore a desire to re-commune with nature. Here in modern times stress and mental illness including depression and its coping mechanisms of smoking, overeating and high alcohol consumption will become the greatest underlying cause of ill-health according to the W.H.O. Modern studies have found viewing or being in nature, in institutional settings this may be a simple garden, to yield these benefits:

Wilderness therapy has been used for the treatment of psychiatric patients, emotionally disturbed children as well as people suffering from other issues. The effects on physical and mental health are positively indicated but some argue that the effect of being in nature may be confounded with the activities of these programs. Wilderness therapy programs like "Outward Bound" do increase the mindfulness, awareness of present moment experiences which reduces rumination on the past, and increase self-satisfaction and efficacy of adolescents. Mental health patients tending gardens and in turn selling their produce have increased self-esteem, better social integration, and a sense of accomplishment and pride.

Many times our entering into nature is accompanied by exercise like hiking or biking, which have obvious benefits to our health like decreased obesity and better cardiovascular health. People who have more ready access to nature are more likely to undertake physical activity. Just visiting a garden 4-5 times per week for a total of five hours reduces depression rates by around 25%. Sadly Americans spend 90% of their lives in buildings with children spending only 30 minutes a week in unstructured activity outdoors. Urban planners need to make green spaces readily available to encourage visitation by the population and reap these benefits. The needs of the hiker, runner, and walker also need to be accounted for in planning the strenuousness of the trails for these activities to encourage their use.

What does all of this mean for long-distance hikers? Physical activity will benefit cardiovascular health and there does appear to be a dose-time relationship so 6 months in the woods will take full advantage of this. There are stressors in long-distance hiking like the physical and mental distress it can cause, which are not typically present in a day hike or visit to the park. I would like to see a study performed on pre and post-long-distance hikers to look at both their physical and mental health to assess what the net effect is on this group. Until then, ‘tis better to hike and love than never to have hiked at all.


Bratman GN. "Nature Experience Reduces Rumination and Subgenual Prefrontal Cortex Activation." Proceedings of the National Academy of Sciences of the United States of America 112, no. 28 (2015): 8567-72.

Greenleaf, Arie T. "Nature-Based Counseling: Integrating the Healing Benefits of Nature into Practice." International Journal for the Advancement of Counselling 36, no. 2 (2014): 162-74.