Many long-distance hikers suffer from a burning, tingling, or feeling of numbness in their arms, legs, or feet. A study of surveys from 128 hikers who either hiked the P.C.T. or A.T. and hiked at least 500 miles was conducted before the terminus of either trail. The demographics of the hikers were:

The study found that the prevalence of this illness was related to pack weight. The hikers with medium weight packs were 1.5 times as likely to suffer the above symptoms and the heaviest pack hikers were over twice as likely compared to the lowest pack weight hikers. Footwear was also co-related to this illness, but could not be separated 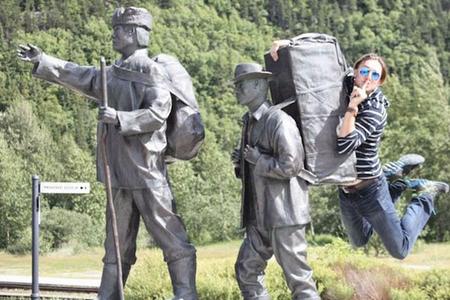 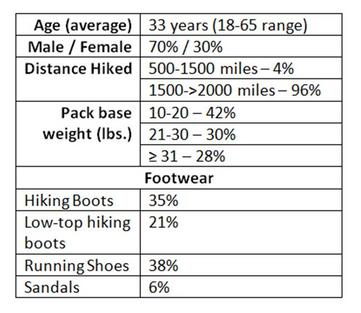 Lighten Up – Another Reason to Carry Less

from the effect of pack weight. It’s likely the sandals and running shoe hikers tended to have lighter packs since this would be part of the ultralight philosophy. With the arrival of commercially available ultralight gear, it’s a more practical option than making your own gear. This has likely lead to ultralight backpacking becoming more popular, but taking this to the extreme can reduce a hiker’s options and thus put the hiker at greater risk when the unforeseen arrives. This is especially true for freshmen hikers. This study does support reducing pack weight to avoid this illness but this means giving up on items you may think are a necessity. So somewhere between a pack mule and Winton Porter's "Go Freezers" is the correct balance. Unfortunately, there are so many gear lists available, and many of these aren't tailored to long-distance hikers, that gear selection becomes a confusing nightmare. Even when consulting former thru-hikers, personal opinions are strongly held, even about something as seemingly simple as whether to carry maps or not. Nevertheless, I feel your pain having watched my son go through this process twice and getting it disappointingly wrong the first time.

Update: The trend toward lighter footwear continues as The Trek's 2019 AT Thru-Hiker survey found the following:

Sandals are obviously not for everyone and the move toward lighter footwear stops with trail-runners. Their popularity has almost completely replaced other options as the footwear of choice. The average age of thru-hikers is still in the mid 30's, range 15-70. The ratio of male to female has fallen to 59%:41% and 86% of hikers headed NoBo.

Porter, Winton. 2009. Just Passin' Thru : A Vintage Store, the Appalachian Trail, and a Cast of Unforgettable Characters. Birmingham, Ala.: Menasha Ridge Press. http://site.ebrary.com/id/10395094.

Mariposa. 2019. "The Top Footwear on the Appalachian Trail: 2019 AT Thru-Hiker Survey." The Trek website.